Bala Narayana Seva in the morning for poor slum children

Bala Narayana Seva, as we call the programme in which we ‘worship’ God in the forms of all the children of financially poor and socially backward families who come to our Ashrama every morning, is a project that the Ashrama has been conducting for more than a decade now. They are sent by their parents or guardians to the Ashrama not just to make them have a sumptuous breakfast of nourishing and tasty food but also to make them learn good samskaras or habits.

In India the system of education has been a very value-based and comprehensive one from the beginning. Children are taught to respect their parents and other elders as veritable forms of God and with that humble attitude they have naturally open minds. Thus in the beginning years when the child has not yet developed a reasoning or a discriminating mind, whatever the elders’ imprint on their minds is stuck there forever. The idea here is to make the child learn and memorize whatever best it can, by taking advantage of its wide-open, eager, willing and impressionable mind at that stage of development into consideration and then let it learn when it comes of a mature age whatever subject it wants to learn in its own style. In the later stage, the educator transforms his/her role as a mere suggestor and a dispeller of doubts. Learning at a mature age would be then done as freely and as joyfully as in the childhood, because the necessary power of concentration and grasping has already been acquired and that secret broken once for all, using it as a weapon, the youth only has to collect various facts regarding his/her interests.

We at Ramakrishna Math, Hyderabad, while providing the much required nutritious food as a breakfast everyday to the mostly slum-dwelling children [of the first category (kids having impressionable minds)], concentrate on imparting some values in them, making them recite many Shlokas or verses in Sanskrit that are fully loaded with wisdom on how to live in this world and how to conduct oneself as an enlightened citizen and a responsible person in the society and also those which will come handy in deciding which is the right way when they are face to face with troubles and temptations in future life. Two of our monks daily spend time with them, making them feel at home and making them learn many fundamental things as if they were fun. Also they are taught cleanliness and other small but important things which will help them feel equal to those well-to-do friends in their schools or neighborhood.

Every day about 60 to 70 children are given milk mixed with Bournvita along with a good breakfast. During the school holidays around 175 to 200 children enjoy this. Also at the beginning of the school, the necessary stationery is provided to them. 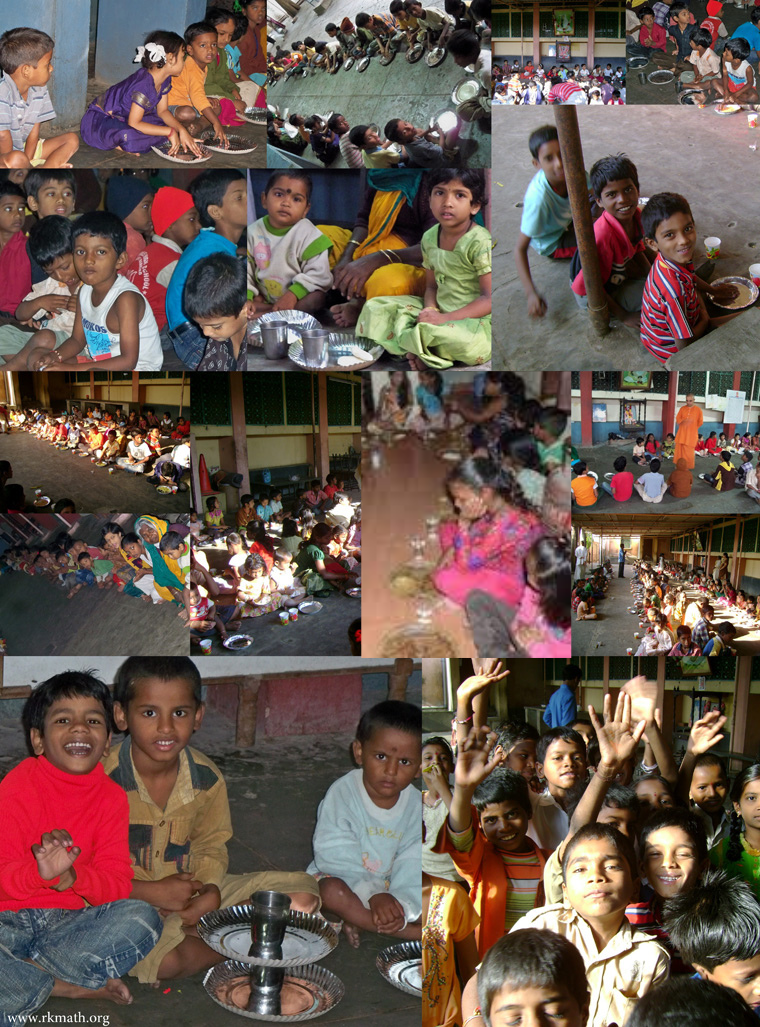