Sri Ramakrishna was born on 18 February 1836 in the village of Kamarpukur about sixty miles northwest of Kolkata.

His parents, Kshudiram Chattopadhyaya and Chandramani Devi, were poor but very pious and virtuous.

As a child, Ramakrishna (his childhood name was Gadadhar) was dearly loved by the villagers. From early days, he had strong disinclination towards formal education and worldly affairs.

He was, however, a talented boy, and could sing and paint well.

He was fond of serving holy men and listening to their discourses. He was oftentimes found to be absorbed in spiritual moods.

At the age of six, he experienced the first ecstasy while watching a flight of white cranes moving against the background of black clouds.

This tendency to enter into ecstasy intensified with age.

His father’s death when he was seven years old served only to deepen his introspection and increase his detachment from the world. 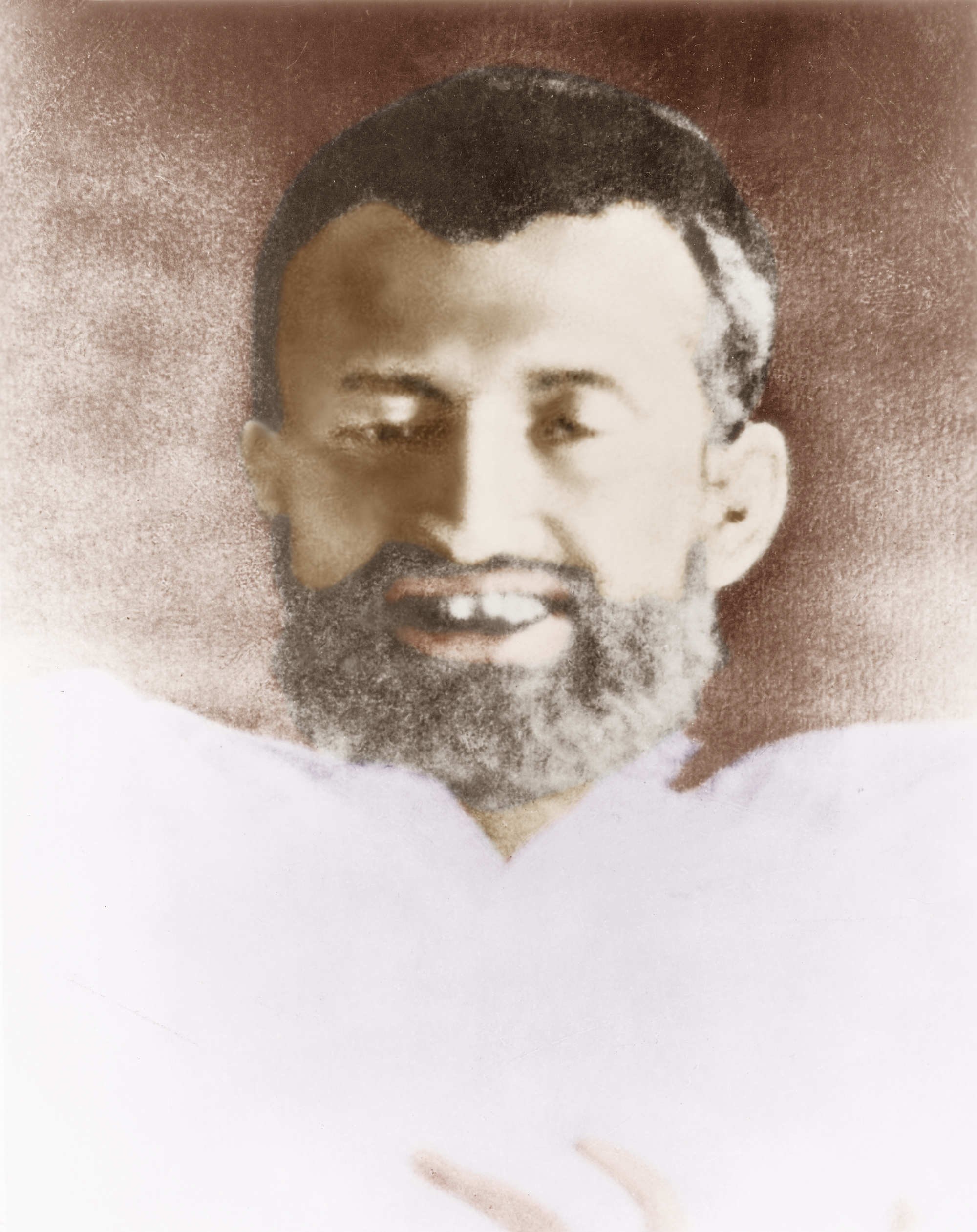 As a Priest at Dakshineswar Temple

When Sri Ramakrishna was sixteen, his brother Ramkumar took him to Kolkata to assist him in his priestly profession.

In 1855 the Kali Temple at Dakshineswar built by Rani Rasmani was consecrated and Ramkumar became the chief priest in that temple.

When he died a few months later, Ramakrishna was appointed the priest.

Ramakrishna developed intense devotion to Mother Kali and spent hours in loving adoration of her image, forgetting the rituals of priestly duties.

His intense longing culminated into the vision of Mother Kali as boundless effulgence engulfing everything around him.

With his unquenchable thirst for God, Sri Ramakrishna broke the frontiers of Hinduism, glided through the paths of Islam and Christianity, and attained the highest realization through each of them in a short span of time.

He looked upon Jesus and Buddha as incarnations of God, and venerated the ten Sikh Gurus.

He expressed the quintessence of his twelve-year-long spiritual realizations in a simple dictum: Yato mat, tato path “As many faiths, so many paths.”

He now habitually lived in an exalted state of consciousness in which he saw God in all beings.

Sri Ramakrishna’s God-intoxicated state alarmed his relatives in Kamarpukur and they got him married to Sarada, a girl from the neighbouring village of Jayrambati.

Unaffected by the marriage, Sri Ramakrishna plunged into even more intense spiritual practices. Impelled by a strong inner urge to experience the different aspects of God he followed, with the help of a series of Gurus, the various paths described in the Hindu scriptures, and realized God through each of them.

The first teacher to appear at Dakshineswar (in 1861) was a remarkable woman known as Bhairavi Brahmani who was an advanced spiritual adept, well versed in scriptures. With her help Sri Ramakrishna practised various difficult disciplines of the Tantrik path, and attained success in all of them.

He remained in that state of non-dual existence for six months without the least awareness of even his own body. In this way, Sri Ramakrishna relived the entire range of spiritual experiences of more than three thousand years of Hindu religion.

In 1872, his wife Sarada, now nineteen years old, came from the village to meet him.

He received her cordially, and taught her how to attend to household duties and at the same time lead an intensely spiritual life.

One night he worshipped her as the Divine Mother in his room at the Dakshineswar temple.

Although Sarada continued to stay with him, they lived immaculately pure lives, and their marital relationship was purely spiritual.

It should be mentioned here that Sri Ramakrishna had been ordained a Sannyasin (Hindu monk), and he observed the basic vows of a monk to perfection.

But outwardly he lived like a lay man, humble, loving and with childlike simplicity. During Sri Ramakrishna’s stay at Dakshineswar, Rani Rasmani first acted as his patron.

After her death, her son-in-law Mathur Nath Biswas took care of his needs.

Sri Ramakrishna’s name as an illumined saint began to spread.

Mathur once convened an assembly of scholars, and they declared him to be not an ordinary human being but the Avatar of the Modern Age.

In those days the socio-religious movement known as Brahmo Samaj, founded by Raja Ram Mohan Roy, was at the height of popularity in Bengal.

Sri Ramakrishna came into contact with several leaders and members of Brahmo Samaj and exerted much influence on them.

His teaching on harmony of religions attracted people belonging to different denominations, and Dakshineswar became a veritable Parliament of Religions.

Coming of the Devotees

He divided them into two categories. The first one consisted of householders.

He taught them how to realize God while living in the world and discharging their family duties.

The other more important category was a band of educated youths, mostly from the middle class families of Bengal, whom he trained to become monks and to be the torchbearers of his message to mankind.

The foremost among them was Narendranath, who years later, as Swami Vivekananda, carried the universal message of Vedanta to different parts of the world, revitalized Hinduism, and awakened the soul of India.

The Gospel of Sri Ramakrishna

Sri Ramakrishna did not write any book, nor did he deliver public lectures.

Instead, he chose to speak in a simple language using parables and metaphors by way of illustration, drawn from the observation of nature and ordinary things of daily use.

His conversations were charming and attracted the cultural elite of Bengal.

These conversations were noted down by his disciple Mahendranath Gupta who published them in the form of a book, Sri Sri Ramakrishna Kathamrita in Bengali.

Its English rendering, The Gospel of Sri Ramakrishna, was released in 1942; it continues to be  popular to this day on account of its universal appeal and relevance.

The intensity of his spiritual life and untiring spiritual ministration to the endless stream of seekers told on Sri Ramakrishna’s health. He developed cancer of the throat in 1885.

He was shifted to a spacious suburban villa where his young disciples nursed him day and night.

He instilled in them love for one another, and thus laid the foundation for the future monastic brotherhood known as Ramakrishna Math.

In the small hours of 16 August 1886 Sri Ramakrishna gave up his physical body, uttering the name of the Divine Mother, and passed into Eternity.

The message of Sri Ramakrishna to the modern world, which he gave through his life and through his recorded conversations, may be briefly stated as follows:

The goal of human life is the realization of the Ultimate Reality which alone can give man supreme fulfilment and everlasting peace. This is the essence of all religions.

The Ultimate Reality is one; but it is personal as well as impersonal, and is indicated by different names (such as God, Ishvar, etc) in different religions.

The Ultimate Reality can be realized through various paths taught in world religions. All religions are true in so far as they lead to the same ultimate Goal.

Purity of mind is an essential condition for the attainment of the Ultimate Reality; real purity is freedom from lust and greed. External observances are only of secondary importance.

Through spiritual practices man can overcome his evil tendencies, and divine grace can redeem even the worst sinner. Therefore one should not brood over the past mistakes, but should develop a positive outlook on life by depending on God.

God realization is possible for all. The householders need not renounce the world; but they should pray sincerely, practise discrimination between the Eternal and the temporal and remain unattached. God listens to sincere prayer. Intense longing (vyakulata) is the secret of success in spiritual life.

God dwells in all people but the manifestation of this inner Divinity varies from person to person. In saintly people there is greater manifestation of God. Women are special manifestations of Divine Mother of the Universe, and so are to be treated with respect.

Since God dwells in all people, helping the needy should be done not out of compassion (which is an attitude of condescension) but as humble service to God.

Egoism, caused by ignorance, is the root-cause of all suffering.

Life is an expression of the spontaneous creativity (Lila) of God. Pleasure and pain, success and failure, etc are to be borne with patience, and one should resign oneself to God’s will under all circumstances.

Some sayings of Sri Ramakrishna

One of the important contributions of Sri Ramakrishna is the reestablishment of the ideal of God realization in the modern world.

In a world in which people’s faith in traditional religions has been considerably reduced by the relentless attack of the forces of atheism, materialism and scientific thinking, Sri Ramakrishna established the possibility of having direct experience of transcendent Reality.

His life has enabled thousands of people to gain or regain faith in God and in the eternal verities of religion.

As Mahatma Gandhi has stated: “His (Ramakrishna’s) life enables us to see God face to face. No one can read the story of his life without being convinced that God alone is real and that all else is an illusion.”

Sri Ramakrishna, however, is more well known all over the world as the Prophet of Harmony of Religions.

He did not say that all the religions are the same. He recognized differences among religions but showed that, in spite of these differences, all religions lead to the same ultimate goal, and hence they are all valid and true.

This view is nowadays known as “Pluralism”: Sri Ramakrishna is its primary originator.

The uniqueness of Sri Ramakrishna’s view is that it was based, not on speculation, but on direct experience gained through actual practice.

Since conflicts among religions and the rise of religious fundamentalism are a major threat to the peace, prosperity and progress of humanity, Sri Ramakrishna’s doctrine of harmony of religions has immense importance in the modern world.

Regarding this, the distinguished British historian Arnold Toynbee has written: “… Mahatma Gandhi’s principle of non-violence and Sri Ramakrishna’s testimony to the harmony of religions: here we have the attitude and the spirit that can make it possible for the human race to grow together into a single family – and in the Atomic Age, this is the only alternative to destroying ourselves.”

Bridge between the ancient and the modern

Sri Ramakrishna is the real link between the ancient and the modern.

He showed how the ancient ideals and experiences could be realized even while following the normal modern way of life.

Sri Ramakrishna’s emphasis on truthfulness and renunciation of lust and greed has given a great boost to moral life in modern times.

Although the principle of oneness of the Supreme Self and its immanence in all beings is a central point in the Upanishads, it was seldom applied in practical life.

Sri Ramakrishna saw the Divine in his wife, in his disciples, in others, even in fallen women, and treated them all with respect.

The famous dictum of the New Testament, “God is Love”, found its verification in Sri Ramakrishna.

Divinization of love and human relationships is another contribution of Sri Ramakrishna which has immense significance for the welfare of humanity.