The fact that Indian culture has stood the test of thousands of centuries and is even now flourishing is because it has been born of the fire of tapas, and not on any anything flimsy.

Tapasya is the very core of Indian life from which has sprung all knowledge, sacred and secular. From tapas also should spring forth all karma, thoughts, and words.

Every person young or old, monk or householder has to base life on tapas. If life in all its aspects: physical, psychological, moral, intellectual, and spiritual, is not based on tapas it will soon disintegrate.

The Vanam has also been central to Indian culture and spirituality. Humanity’s greatest thoughts, the highest metaphysical conceptions, the matchless ethics, and the absolute truths were experienced by our ancestors in the forests that surrounded their dwellings.

‘Seek to know Brahman through tapas’, teaches a father to his son in the Taittiriya Upanishad, occurred in the ancient forests.

That lofty spirituality that has flowed from Vanams and has nourished us is now inundating the world.

Tapa and Vanam are thus the two main streams of Hindu culture; join both and it becomes a single Tapovanam.

The idea of naming it after Swami Vivekananda is: in this age he embodied this ancient Tapovanam of Hindu culture. 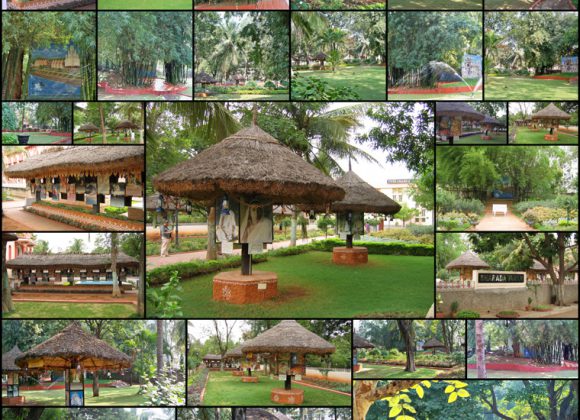 And with his characteristic genius Swami Vivekananda has rejuvenated and made modern, this Tapovanam, not just for Indians but for the whole world.

The Ramakrishna Math, Hyderabad, has recreated a peaceful ambience with Swami Vivekananda’s likeness seated on a Nagalimgam (Couroupita guianensis) flower in sylvan surroundings.

This Tapovanam has also a bearing in his life for his discipleship commenced in such an ambience in Dakshineshwar.

Visiting this elevating place is like returning to our roots.

Here one feels a tangible sense of peace and power.